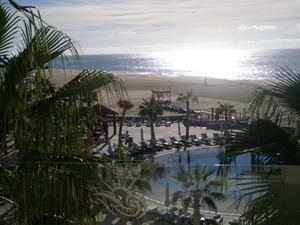 Today, Brip Blap posted some thoughts on establishing a "go to hell fund."  You know what this is, a stash of money in sufficient quantity such that in the event you wanted to leave your job (or your employer wanted you to leave), you would have the power not only to land on your feet, but take that opportunity to go off on a new direction if you wanted to.  If you found yourself without that job, you could take time off, start a business, or at the very least take time to decide what to do next.

My friends and I often played this game "how much would you need to have accumulated (or win from the lottery) for you to be able to walk from your job and never look back?"  You know what that's called--the "F"-you amount.  This differs from the "go to hell" fund in that it is the amount you need to never have to work again, not just the amount to bridge you to your next income-producing gig.  Everyone fantasizes about this to a certain extent, even if you love your job.  We all have things we would love to be doing if our day wasn't so consumed by the business of earning a living.

So, I had a magic number in mind and lusted after retirement in a very real way, not just as a fantasy, for many, many years.  When I reached this magic number (ok, well close enough), I decided that I needed to confirm that this is indeed, what I really wanted.  I think this is an important step for anyone considering retirement.  You spend so much time working for that goal, you need to step back and make sure it's what you really want, not just what you thought you wanted.

So, as a result of a New Year's resolution made on the beach in Mexico, I went back to work January 2, 2007, with a new tracking spreadsheet.  Each day, at the end of the day, I would put an "x" in the column representing what kind of day it was for me at work:  "plus," "minus," or "equals".  (I know, such an accountant!)  In six months, it was my intention to add up all the marks in each column and see where I stood.  I have a tendency to ruminate over the bad days at work more than remember the good days, so I though it was important to document, to get a real picture at the end of that six months.

Well, by the end of May, the picture was clear.  I had accumulated 10 positive days, 40 negative, and 30 so-so days.  I was ready to take my magic number nest egg and move on to the full-time job of retirement. As fate would have it an unrelated discussion with a partner in my firm resulted in my confession of my desire to retire.  The wheels were in motion!  But I had no regrets.  I knew it was not just a reaction to a bad day (or even 40); I really wanted to retire.  It wasn't just that I had the money, this is what I really wanted.

Ultimately, I worked for eight more months while we found my replacement and worked through the transition.  Despite the name of the "F-you" fund, I would never recommend burning your bridges by using it in that fashion.  It just represents the power to pursue whatever dream you have for yourself.  And as we all know, we should use that power for good, not evil.

Posted at 12:00 PM in Retirement | Permalink

I decided a while ago not work with difficult people anymore. I did this after reaching a certain level of comfort and a paid off mortgage. I don't really want to retire because I like the challenges of my job and I love the people.

This has given my self-esteem a boost and I feel more confident in my professional abilities.

That was the hardest part of retiring from my job, actually, leaving the people that I loved hanging out with every day. That was definitely the best part of working.

Having said that, I definitely do not miss the actual work part!

I haven't looked at Brip Blap's post yet but I plan to. I think this will help me to put my spending priorities in order for the next year. For me, as you probably well know because I can't stop talking about it!!!! I am very close to reaching my minimum retirement age (MRA). Once I reach it and retire from this job I call hell (ok it's not all that bad, but I know I want to be doing something different), I'll get a tiny monthly income and my health benefits for the rest of my life.

But, I've also got at least 3-4 months worth of money sitting in a CD right now that matures on my retirement date (ta da) that I can use to help me find my way to my next chapter in life.

I know what you mean. Once you make the decision you are going to retire, it makes even a not so bad job seem excruciating. Hang in there, you'll make it, and for lifetime health benefits, absolutely worth the wait!

I used to track this on a graph. Good days would get a notch up, neutral days would sidetrack and negative days would give the graph a notch down. I ran out of paper at the lower edge after a few months.

For the awesome few that number is actually close to zero. These people are so talented that they can always find a job doing whatever working a few months to pay for a years worth of living expenses. Being overeducated I find myself less talented, but I'm working on it.

It is because you spend your time making graphs to track your lifes progress that you are 'unhappy'. I`m just curios, how can you decide, at the end of the day, that it was a good day or a bad day. Please, wake up, and realize that everyday is a good day, simply because you are alive, breathing, having a chance to get your goals fulfiled and you mission accomplished.

That's a very interesting technique of determining whether you really want to retire or not. I might wanna try it at work next week. But I think it has to be 24 months for me. I'm still far from my target money. I even have to rely on cash advance (payday loan) to pay for the bill sometimes. Just a little amount, though. And I have to agree with you on if you're gonna retire, you can start a business. I think that's what I'm gonna do as soon as I leave my work.

Syd,
You and your commentors have done a good job of capturing the three questions we identified in our book, Your Retirement Quest, that need to be ansswered "yes" to determine when it's right to retire:
1) Do I have enough?
2) Will I have enough to do?
3) Have I had enough?

Actually, we added a fourth:
4) Will my spouse/partner want me home 24x7?
Alan Spector