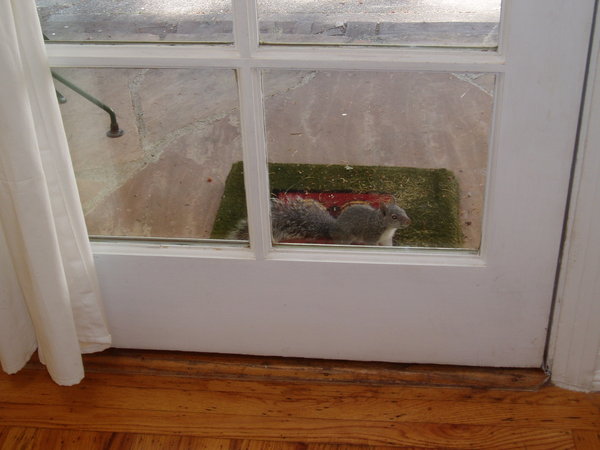 I hate nature.  Don't get me wrong, I love looking at it out the window from the comfort of my couch.  I just don't like it when it joins me on the couch, as the tick did last night.

A couple of weeks after I retired, we moved into our vacation home.  Our plan is to live here for a few years before selling it to finance our golden years.  It's in a beautiful wooded spot, but living here is really going to test the mettle of this bug/rodent/snake skittish girl.

The bugs that call this place home are a varied and ugly bunch.  A friend that was living here a couple of years ago found a scorpion in the house, so now I am very vigilant about my surroundings at all times.  A midnight trip to the bathroom is not without its anxieties.  The decision to just hold it 'till morning often trumps comfort.  I am reluctant to risk putting my feet on the floor in the dark--the territory of who knows what creepy-crawly.

I was not one of those children fascinated with bugs and would never have been found actually picking one up.  I was the child that ran shrieking the other way (and haven't changed much since growing up).

Our first night after moving up here I had banished Doug to the guest room for snoring infractions.  At 2am he was up, all the lights were on, and a look of panic was on his face.  "Do you hear that?"  I didn't hear that.  "I'm not sleeping in that room, there's a NOISE."  He came to join me.

I put earplugs in.  "Do you hear that?"  (He shook me awake since I had earplugs in--so, no, I didn't hear that, but thanks for waking me up AGAIN.)  I listened until I heard what he heard--a rodent party of some sort in the attic or below the house.  Mickey must have scored some primo nuts because they were really living it up.  Party's over now, we've trapped 6 mice under the house since that night.

Now the biggest invader in the house is the Box Elder bug.  They are all over the outside of the house and are mating in the landscaping mulch.  Many have found their way inside.  If you smash them, they leave a red spot, so you really have to pick them up, something that I am unwilling to do.  If Doug is not here, I have to get the vacuum hose.  Three feet away is about as close as I want to get to most of the creatures sharing my home.

It's a good thing our front door is windowed.  Because I think if I had opened the door without looking, the squirrel pictured above would have come right in the house.  He sat on the front doorstep for about a half an hour--as if he was actually waiting for someone to open the door for him.  I began to wonder if this was my reincarnated Beagle sitting there thinking "what the heck--did they seal up my doggy door?"

My partner and I are planning for early retirement and we've contemplated buying a vacation home in the country then moving into it when we retire. It's interesting to hear that you guys did that.

Would it be practical seal your home better so the bugs can't get inside?

What about getting a cat for the mice?

We also have a 2nd vacation home at the beach. We've had squirrels in the attic. Mice in the crawl space. Spiders EVERYWHERE! Sometimes I can't wait to come home to my real house!
I sleep in fear of ticks crawling up the bed (they have) crawling up the couch (they have) finding them crawling up my leg (I have!).
We're going to sell also to fund our platinum years. I can't wait till I can just live in one home!

Kevin: We do actually have some neighborhood cats that are trying their best--the job is just too big. I watched a cat kill a mouse the other day from my window. While I'm happy to have them help, it's awful what they do, really. They don't just kill the poor little thing, they play with it for a long time before putting it out of its misery. I think the traps are more humane!

I thought about getting the perimeter of the house sprayed, but I hate to use pesticide, I know it just makes the problem worse in the long run.

Boomie: I know what you mean about two houses, not just the pests but the cleaning too! (I, too wake up think bugs are crawling on me while I sleep--I mostly think it's just in my mind, but I did get a spider bite somewhere--probably sleeping).