« Free New York, Well Worth the Price of Admission | Main | It Was a Dark and Stormy Night »

Invasion of the (Retirement) Body Snatchers 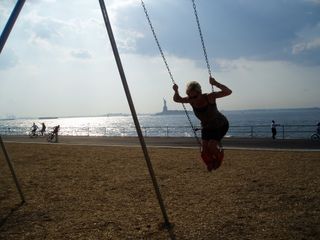 We visited with a friend here in New York a couple days ago.  He asked us about our retirement, and whether this was it for us.  You know, the end of the working thing.

When he said he would like to be retired too, I told him I wasn't sure whether he would like it yet.  I think he loves the fast-paced deal-making of his work and would miss it.

He wasn't sure about that, but he did say that he feared that he would engage in self-destructive behavior if he were retired.  The fact that he has to be at work the next day prevents him from drinking four martinis the night before.  If he didn't have to be functioning the next day, would he be?

Doug had lunch a few years ago with another co-worker from the past.  Mark asked Doug what it was that he did all day.  Doug recited a list of his usual activities, including his new hobby, biking.  Mark is another that really enjoys the fast pace of his work life.  He said that he didn't think he could just ride his bike all day.

So is it true that if you are retired you have to drink four martinis each night and bike all day?  Or play golf and watch TV?  Or get lazy, boring, or whatever else it is that you fear?

There seems to be an idea that once you retire, this alternative personality comes out, snatches your body and takes it hostage.  All of a sudden, you will be living in a parallel universe where your thoughts and actions are controlled by this alien being who will make you do all sorts of things that you don't really want to be doing.  The you you thought you were will be gone forever, and now you have to wear black knee socks with sandals and move to Miami.

Here's a little secret:  You get to do anything you want to do when you are retired.  It's true.  Anything.

Now, it takes each person a different amount of time to figure out just exactly what that anything is, and while you are figuring it out, you might feel lazy, boring, and unproductive.  But after you start to figure out who you really are without work defining you, you will overpower that body snatcher and send it back to the pod it came from.

Posted at 07:37 AM in Retirement | Permalink

This passiveness about our own lives is what gets us into trouble as a society. The vast majority of the population is constantly looking for someone to tell them what to do. Look how popular Obermon, O'Reilly, Rush, etc. are. They don't provide information, as there are tons and tons of better places to get information. They literally tell their minions what to think.

This passiveness is proven time and again throughout history, as entire populations submit themselves to some atrocious ruler/ruling class and allow these people to control their lives. We are doing this right now with our politicians.

I might have been a little over the top with the comparisons, but this attitude really annoys me. It is just further proof people don't think for themselves.

By the way, I'm not lumping people who love their jobs in this category.

When asked similar questions about retirement, my response is to ask what is their passion when not working. If they have no hobbies or passion, my response is that they might want to keep the job. They will never be happier.

Regardless what the answer may be, my advice is that they "retire to" rather than "retire from". Retiring to implies a goal. Retiring from implies glad to leave that behind.

@Wandrin: Good advice, although I must admit, my retirement was a little of both--the "to" and the "from".

Love the title and thought behind your article. I enjoy my work, but of course, the dream of retiring to something more aligned with my passions teases my mind at times... both the philanthropic and self-indulgent aspects of my "retired life" goals.

It's been 10 months now and I'm just starting to figure out what retirement is going to mean to me. Somehow that struggle leaves not as much time as I'd hoped for just "being"; I do try to work a little yoga and meditation into each day but it seems that many days - like today - I'm just busy doing one thing after another. The difference? I'm doing things that I really care about and that are personally meaningful. Driven by my own passion is a nice way to pass the day. Still have to work out some of the guilt of not being employed though.

syd: i find your site refreshing. i've been out over a year. i planed for it for 2 years, everything is as it was planed and i wouldn't want it any other way. but realizing your out takes time. i didn't account for this at first but one day i thought about when i got out of the navy after 4 years i was told by other vet that it would take about 6 months to realize i was free. so why would i expect after 35 years to realize it in less time.

@Fred: Thanks for your comment. It seems so reasonable now, doesn't it? Makes you wonder why we didn't realize this ourselves?

There is always plenty to do aside from golf, fishing, etc. It is volunteering. One receives much satisfaction from having helped someone in need. Try it. Charlie

Charlie: I agree, I've got a little volunteer gig and it does add another dimension to my retirement. And don't underestimate the power of trying to learn something new. I'm finding it very satisfying to take classes, following new areas of interest as they pop up. And since I don't like golf or fishing, works for me!

I took up mixology at one point, drank many more than 4 martininis, eventually got bored with being a drunk and moved on. Now I can make fantastic cocktails, and 1 or 2 at the dinner hour makes for a very civilized end of day, especially when doing things like wilderness canoe trips. The memsahibs in the group enjoy a nice cold Ginger Margharita or Aviation, a brief period of lounging, and feel so relaxed they don't notice or care that the whole thing is a plot to get them to cook dinner.