« Invasion of the (Retirement) Body Snatchers | Main | Again With the Why Travel? (And Happy Anniversary!) »

It Was a Dark and Stormy Night 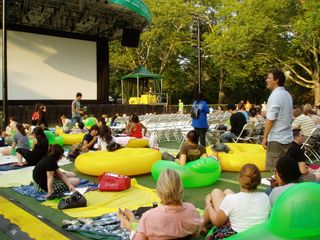 I just learned what they mean by "isolated thunder showers."  Especially the shower part.

We went to Central Park tonight to watch Sex and the City--the movie.  We got there nice and early, smuggled in some wine, and got some very good seats.

We enjoyed a lovely picnic dinner over the two hours before the movie started.  I was totally entertained watching all the people, and made many observations about this year's summer fashion in Manhattan.  I began composing a blog post in my head about it, something about sun dresses, bra straps, and underwear.

But then about three-quarters of the way through the movie, just as Jennifer Hudson was helping Carrie rebuild her life without Big, I was distracted by all the flash photography.  About the time we figured out it was lightening off in the distance, we started to notice about a quarter of the audience packing up to leave.

Carrie had just decided to go meet Miranda in Brooklyn to share New Year's Eve together, a couple of broken hearted girls toasting in the new year.  I couldn't believe that people were going to miss the end of the movie because of a little rain.  I forgot how Big and Carrie got back together, so was eager to see the rest of the movie.  After our neighbors left, we took over their vacated giant, comfy inner tube.

Just as we settled in, they stopped the movie, as the thunder and lightening were getting closer, "for our safety."  I couldn't believe they were stopping the movie for a little rain!  Until I heard the biggest thunder clap of my life.  What was left of the audience let out a collective scream (along with sopping laughter.)  We were drenched within seconds.  We all made our way out of the park, and by the time we got to Fifth Avenue, we were all totally dripping, as if we had just stepped out of the shower (see, that's where they get that shower part.)  Honestly, what we have in California cannot legitimately be called "showers," it's nothing like this.

When we got to the nearest awning, we crowded in with about 40 other drenched movie-goers.  The girl right next to me lost a thong in the jog out of the park and was barefoot holding the other one up to show me.  We ran and ducked with the crowd, awning to awning on 72nd street, making our way to Lexington so we could take the subway back home (we were on the wrong side of the park, so it would have required three transfers to get home, but at least we would be out of the downpour.)

As luck would have it, someone was getting out of a cab and we jumped in, we rarely take taxis, but this seemed an appripriate night for it.  Of course, as soon as we got in, the rain stopped.

It's true what they say out here, "if you don't like the weather, wait five minutes . . ."

(By the way, I would really appreciate it if one of you would remind me how Carrie and Big got back together again.  I know it was a free movie, but I feel totally ripped off!)

Remember, they meet again at the apt they bought together. Carrie is back looking to pick up her heels and Big shows up. Of course, after some amazing sex they are back together!!

Another great read, Syd! This reminds me of the downpour we experienced one 4th of July in Savanna. Fireworks over the river and drenching warm rain. So unCalifornia!

I love Sex and the City anything..... Just think...maybe next summer you can watch the next movie that they are making now!!!

Art: Aah, yes, I do remember that part. Wasn't there also something, though, where Jennifer Hudson hadn't really deleted all of Big's messages and showed them to Carrie or something? Was that after or before they met up in the apartment?

Sara: Wow, I didn't realize they were making another one--I guess I'm kind of out of it, huh?

Most New Yorkers carry a fold up, micro, minnie umbrella in their hand bags.

Sounds like fun. Years ago I attended a Paul Simon concert in Central Park; no rain but 500,000 people. What an amazing city New York is ... even with the downpours. So tell us more about the crowd ... who was there?