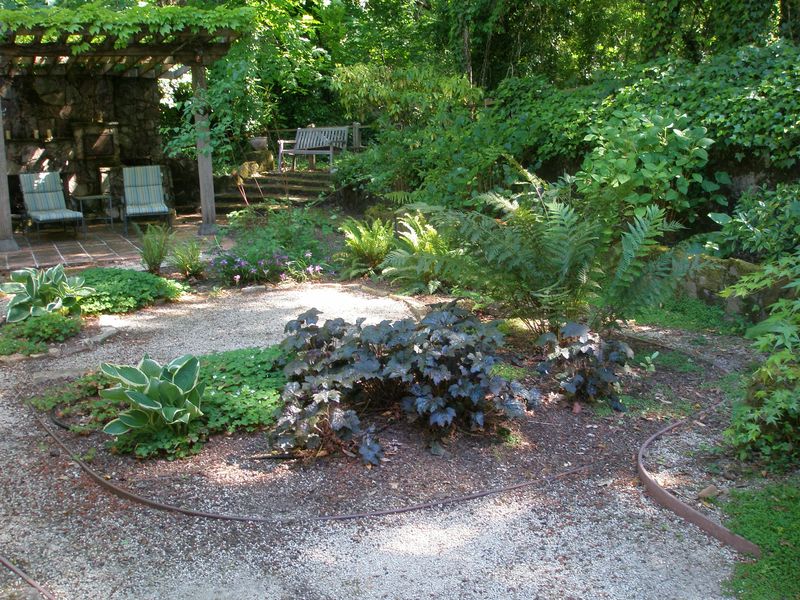 The last couple of days I’ve been watching a Blue Jay pass back and forth with various twigs and mosses in her beak, skirting them off to an undisclosed location to build a nest for her upcoming family.  I’ve been working hard on my nest too, spending the last three days in the garden, weeding, pruning, and generally allowing the spring to show through.

I pruned the Camellia that was blocking the view from the kitchen window.  I admired my handiwork this afternoon as I was making a cup of tea.  It seems my aggressive pruning has exposed the Jay’s nest though—I hope she will still use this one so we can watch her bring up her babies right outside our window.

Now that tax season has come and gone, my part-time consulting gig has become more part-time again.  I suppose that I could use some of that money to pay someone else to toil in my garden, but I am enjoying my commune with nature, and especially the satisfaction of gazing at my work, which I will do this evening over a glass of wine.

Sometimes I forget to appreciate the wealth of time retirement gives me.  Ironically, it’s having the part-time job that is actually rekindling that appreciation.  It’s also the thing that’s allowing me to slow down, relax, and do nothing, without feeling guilty about it.  In fact on the day of the royal wedding, I came home from work, poured myself a glass of wine, and indulged in hours of replayed coverage of the festivities, totally guilt-free.  Take that Glen Beck!

In Praise of Slowing Down

Thanks for sharing the photo of your lovely sanctuary/backyard. I liked trying to spot the different plants you have. So far I think I've seen hostas, heucheras (which also grow out of the walls along the road to Hetch Hetchy, up at Yosemite!), Japanese maple, and a variety of ferns!

I think you're right about part-time work, or indeed any kind of outside commitment, rekindling one's appreciation for our time. Now that we have plenty of time, I think we also realize how valuable it is, and we think pretty hard about how we want to spend that precious resource and whether we want to exchange it for money.

And I am glad to see we're not the only ones watching the birds around our back yard! Just this morning, this year's second batch of dove babies fledged -- well, we only saw one. We also spotted a few heretofore unknown birds at our local park today.

It's amazing how our view of the world changes when we can slow down and just see what's around us. This stuff has always been here, but I've never seen it, let alone known what it was called.

Gotta go rest up for tomorrow's attempt at Mission Peak! Enjoy your garden!

Accidental Retiree: Boy, isn't that the truth--it's always been there but I've never seen it either (wild turkeys, deer, Blue Jays nesting). I guess you have to be watching!

I'm very impressed, you've identified all those plants and even know how to spell them! Ok--tell me, where is Mission Peak?

For those that didn't get my obscure reference to Glen Beck: before I started watching the royal wedding that evening, I first caught part of the O'Reilly Factor where Bill O'Reilly was interviewing Glen Beck about his position that people that watch the royal wedding are stupid. They went back and forth on the topic and then I left that program to go join the stupid people.

Hmmm, I usually don't agree with Glenn Beck (altho' how would I know? I never watch him), but I have to admit I do not understand people's obsessive interest in this midieval ceremony from another country, featuring fashions from a couple of millennia ago.

On the other hand, I watch "Two and a Half Men", so I'm hardly in a position to make fun of anyone else's choice of TV show. But thanks for the tip on how to increase the enjoyment of ANY TV show ... the glass of wine!

Anyway, love your patio; it's really nice. And I agree it's fun to get out and get your hands dirty in the garden occasionally -- altho' I always spend at least twice as much time admiring my work as I spend actually doing the work (which may explain why my garden doesn't look as nice as yours)!

We witness a variety of birds in the migration pattern over our Kansas lake. White pelicans, blue heron, bald eagles, sandpipers,seagulls, jays cardinals, and our ever present turkeys all present in our neck of the woods. After working long hours, "retirement" gives us the opportunity to notice that the birds have learned to live around us- even when our house is a waypoint for the local Army helicopter pilots.