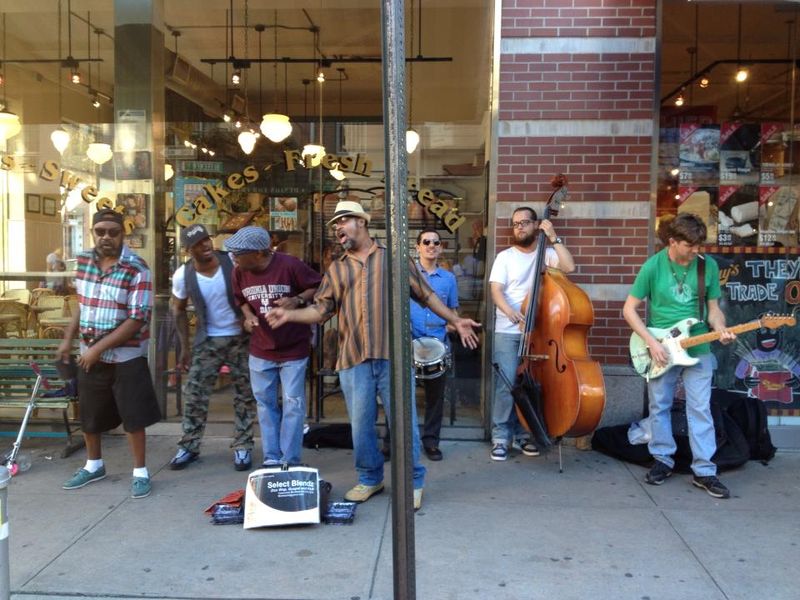 This is our fifth month-long stay in Manhattan.  Even before we started our longer stays here we used to come out for a week each year, almost always in August.  Most people are baffled by our attraction to August in New York because of the weather.  We started this tradition because this is when the U.S Open tennis tournament is.  Some sessions have been sticky, scorching hot and others have been rained out.  It’s hard to know what you’re going to get, sometimes even until the day of your tickets.

But I love the evenings here, joining the nightlife in a sleeveless dress without a sweater.  Actually, the weather this trip has been fabulous, even during the day.  Ironically, the weather our home-exchangers are enduring in California is hotter than it is out here.  It hasn't even been very humid this trip.  We’ve had days mostly in the 70’s and low 80’s, only a tiny bit of rain---unfortunately some of it last night, raining out the Federer match of opening night at Flushing Meadows.

But enough about the weather, it’s more than just the weather.  There was an article in the New York Times a couple months ago about those of us that migrate to NYC when everyone else is escaping.  In fact some of the folks profiled in the article have second homes in the city that they escape to for the summer, from places like Florida:

Yet while Manhattanites fight traffic to get out of the city, a rare breed of part-timer is breezing in from the other direction. In something of a reverse migration, these summertime city dwellers trade their retreats near the beach, lake or mountains for pieds-à-terre and long-term rentals in Manhattan, tolerating the heat, humidity and pungent warm-weather smells in exchange for a more laid-back New York.

Here they find everything from open parking spots to prime tables at hot restaurants, as well as streets and parks brimming with outdoor events and plenty of air-conditioned museums and shops.

They left out home-exchangers, but I totally identify with this breed.  There’s so much going on here in the summer.  Bryant Park, Central Park, South Street Seaport, and Hudson River Park all host outdoor movies, jazz concerts, blues festivals, and other events—all of it free.  It’s easy to get into restaurants, jazz clubs, and Broadway shows, and there are fewer crowds at many museums, at least during the week.

And that’s just the organized stuff.  I am constantly amazed at the talent that we just stumble upon strolling the streets.  Last Wednesday, we enjoyed lunch from a couple food trucks at Hudson Square Lent Space.   We went down there because a jazz pianist, Joe Alterman, was playing for free over the lunch hour.  We discovered him last year playing with Houston Pearson at Dizzy’s Jazz club—he basically stole the show.  Anyway, Wednesday night, we watched Jeff Lorber, Chuck Loeb, and Everette Harp at Iridium and then hopped the 1 train to Christopher Street to catch the New York Funk Exchange at Groove.

Just when I thought we were done for the night, we walked to the Astor Place subway station to catch the 6 train home and there was a wonderful young singer/guitarist serenading us for the eight minutes until our train arrived.  It’s hit or miss in subway station entertainment, but I’m sure we’ll hear more from this talented, soulful musician in the future.

Our friends arrived in town on Saturday and we took them to Murray’s for a wine and cheese pairing class.  We walked out of the shop and took our place in the crowd that was pouring out into Bleecker Street, everyone clapping along to a lively 50’s and 60’s Motown band.

And that was after our morning entertainment in Central Park.  After our walk around the reservoir, we sat down on a bench next to a pair of jazz musicians jamming on the guitar and trumpet.  I'd say they were only in their 20’s.  They played a Sonny Rollins tune and we told them how great they were.  They asked us what we wanted to hear and then proceeded to fulfill request after request.

No one else was really watching—mostly people strolling by with their dogs or children in strollers, just casting a passing glance.  Although everyone was entertained by one delighted little two-year old girl who forced her parents to stop while she wiggled with the music for a few minutes.

You could spend an entire afternoon in Washington Square Park being entertained.  First start at the MacDougal side where the Jazz Collective usually draws a crowd, Rasheed playing two trumpets at a time.   Then proceed to the fountain by the arch to see the guys that do all the acrobatics and politically incorrect humor.  At the other end of the park is the antidote to the anxiety you incurred while watching those guys do back flips over terrified audience members.  At the Washington Square East entrance a classical pianist has somehow managed to get a baby grand out there.  Sit down, lean back, and listen to the notes dance up into the shady canopy.

So much talent here, so much competition, I hope they all can make their dreams come true.  I don’t envy the tough road they have, but I do envy that they don’t seem to ever want to retire.  I’ve seen some pretty successful old musicians, playing up until practically the day they die.  And I don’t think they are doing it just for the money.

Believing in the Dream

Posted at 10:10 AM in Traveling Tuesdays | Permalink

Great wrap-up of the lively, liberating appeal of NYC in the summer. I've got tkts to the Open for Labor Day. Can't wait!

Now you know why I will NEVER leave this city! Thankfully my daughter lives in a 2 bedroom, almost penthouse in mid town with floor to ceiling windows overlooking the Hudson River. If I'm not in NYC at least 2 to 3 times per month, I feel dead. This city is so alive. All you have to do is walk the streets and it's a party every second.

If you get the chance before you go home, go to Grand Central Station and hop on Metro North to Poughkeepsie (POK). The train ride up along the Hudson River is amazing. Once in POK walk over to The Walkway Over The Hudson for stunning views. Also, quaint restaurants on both sides. Just a thought.
http://mylifeinfocusblog.wordpress.com/2012/10/22/a-bridge-over-the-river-hudson/

PS: I have photos of that same group. They're great! They also sell their own CD's.

Have fun. Glad you're here!

Tom: Have fun at the Open!

Cindi: Your daughter's place sounds amazing! Funny you should mention that trip up the Hudson River Valley. Doug's uncle (who lives in Queens) is taking us up there, including the walk over the Hudson. (Note about that Motown band: the CD's are free--with a 15 dollar donation.)

I love the passion that exudes from this post. Life, retired or not, is about living passionately, and I can see how NYC feeds right into your new passion for the piano.

I can also see about a dozen directions you can take all this once you return home. How wonderful for you both!

I either lived in (Greenwich Village) or worked in Manhattan (World Trade Center area) for about 20 years (1981-2001) and had part of my commute take me through midtown Manhattan (to New Jersey) for the next 7 years before I retired in late 2008. I am sooo glad I don't have to deal with Manhattan any more. I have been in Manhattan only twice in the last 5 years, once for a weekend and again for a day trip. I don't miss the place one bit.

I love being in NYC and try to get there once or twice a year. You really captured the appeal of just wandering the city...there is always something to do and see and great food.

It is so easy to move by the subway even as a visitor. My kids started going with us to NYC when they were in their teens and they fell in love with it too.