« Retirement Fantasies | Main | How to Juice Up Your Retirement Returns » 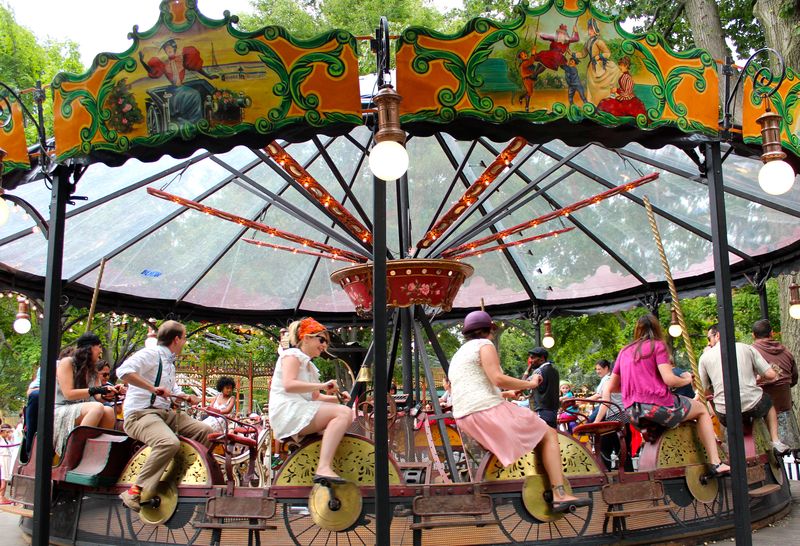 We got home from New York on Wednesday night.  On Thursday, Doug went for a bike ride with a friend and then ran some errands.  I stayed home and played the piano for five hours.  I took a break for lunch, but basically I was at the piano all day.  I was totally occupied.

I didn’t really miss my piano in New York because when I was in New York I was totally occupied with New York.  Even the week before we left on our trip, I didn’t really play the piano.  I was actually a little burned out, and welcomed the break from my practice routine.  But now it’s all I want to do again.

Generally, when we’re at home, we spend most nights eating dinner in front of the TV.  There are a lot of shows we like lately, Newsroom, Dexter, The Killing, Downton Abbey, House of Cards.  But before we left on our trip, I was beginning to get sick of our evening routine, sitting in front of the TV--just like we did when we were working.  I was ready to break out of that.

In New York, we ate dinner out most nights.  I think we maybe watched four hours of TV the whole month we were there.  We were either at a Yankee’s game, or watching Serena Williams at the U.S. Open, or at a jazz club, or a Broadway show.  By the end of our stay, we were totally exhausted.  I was so ready to go home and eat dinner in front of the TV.

When you retire, you have to replace your occupation with something else that occupies you.  You need to feel engaged in something.  But it’s not going to be the same thing every day for the rest of your life.   You need cycles.   I can’t play piano, or go out every night, or stay home with the TV every night, or travel, or do anything day after day after day.  I need to cycle back and forth between new and old passions.  I need to cycle back and forth between periods of high activity and slower paced ones.  Heck, I’ve even cycled between work and retirement in my retirement.

Many people feel like they need to set up a routine in retirement.  I think I might be the opposite.  I’m happiest drifting between the extremes.  On our trip I was happy to be out exploring all the time.  Going a mile a minute.  The last few days, I’ve been so happy to just relax at home.  Really, I didn’t even leave my house the first four days I was back!

Ok, so I just finished a blog post, and now I'm off to the piano, before settling down in front of the Dexter episodes we missed while in New York.

Things I’m Learning from Retirement:  Get Out of  Your Routine!

How to Keep Retirement Engaging

Is Being Content Preventing You from Being Happy in Retirement?

Varying your schedule is important to keep your days fresh and exciting. I must admit though - when I saw the picture that accompanies this post and read that Doug went for a bike ride, I expected this post to be about something totally different!

Playing piano for five hours ... I'm impressed! The only thing I can do for that long at a stretch is sleep. Anyway, I agree, that's what a vacation is for, to break up your usual routine. And just 'cause we're retired doesn't mean we don't have a routine . . . or need a vacation. Glad you had a good time in the Big Apple!

Like you, I am not a routine person, although I occasional admire folks like Bob over at SR who plan their days. Not to encourage you to watch more TV than you are, but you may want to check out The Bridge if you enjoy the Killing and such. It comes on at eleven here in mountain country so this is one of those cases where the DVR is my friend.

Tom: I'll bet you could watch TV for five hours--maybe? But you're right, that is one of the appeals of vacation, getting you out of your routine, isn't it. I guess that's why we still need vacation even when we're not working.

Barb: You are the second person to recommend The Bridge. We're always looking for new, good quality shows (there are so many bad ones--I'm looking at you Housewives). I'll have to check that one out. I've even considered re-trying Breaking Bad. We watched a couple seasons and then got burned out. But everyone seems to like it so much, maybe I should give it another chance.

It is so great to see you posting again so frequently! I love your blog.

Linda: Thanks for the encouragement!

OMG! I have never been a routine person and I always thought of it as a bad personal trait. I have hope now that it ain't necessarily so. Thank you, Syd!

I think that is what is so great about retirement...your days don't look the same and you can make them look any way you wish them to.

I find my day changes when I stay open to new things that come my way. After a lifetime of planning for the whole family, this is so freeing. You seem to just roll with whatever comes...

I'm with a lot of the folks that have commented before! I couldn't do anything more than sleep for five hours, or maybe do some of the work things that I do here at senior match. I'm in complete agreement with you about getting the lead out and doing something that's for you in retirement -- after all, we're supposed to enjoy ourselves, right? Thank you for posting, and keep up the great work!