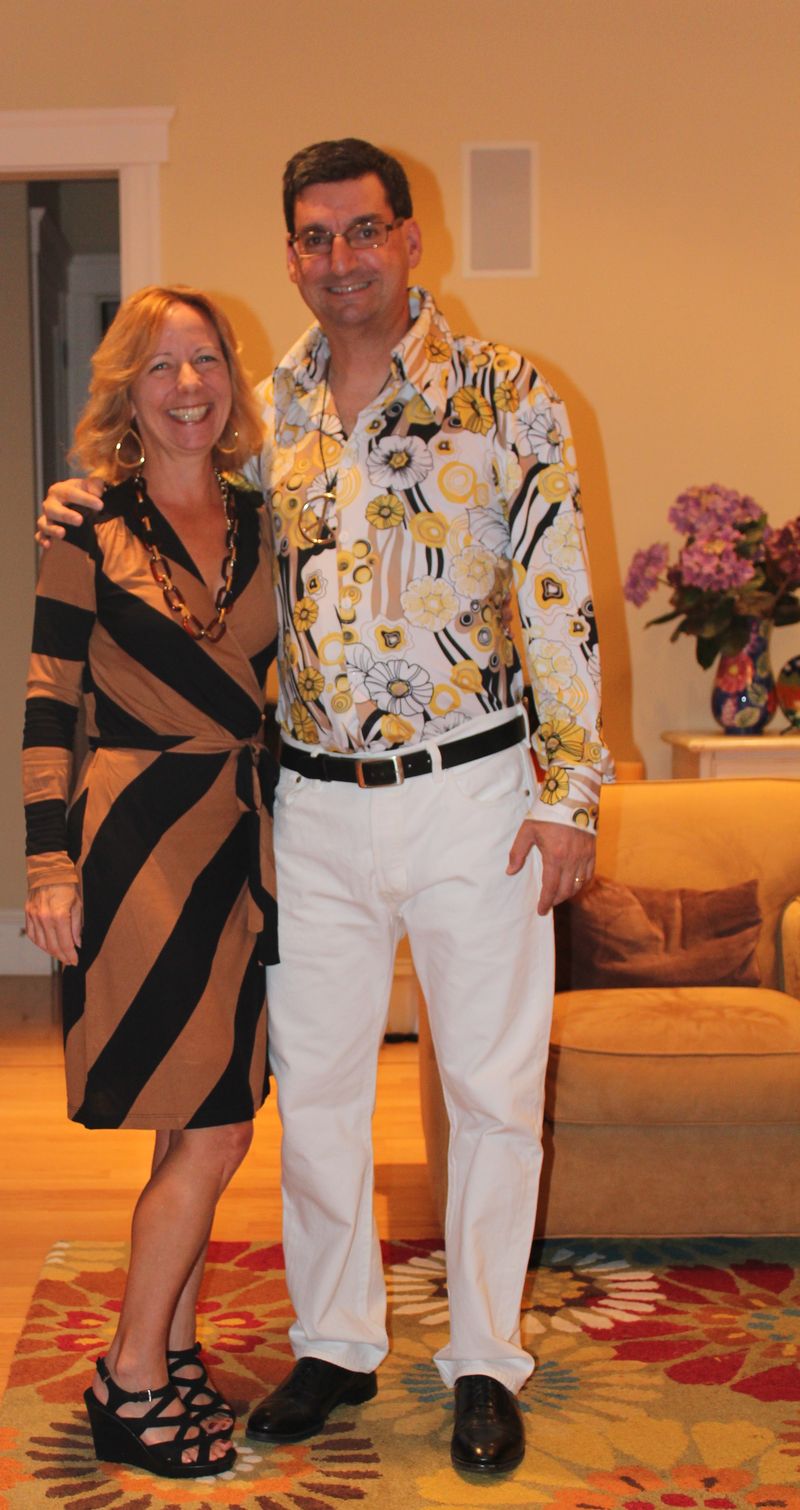 (Photo Details:  Doug and Syd dressed for a 70's disco party.  Revisiting the era before the invention of the 401(k) plan.)

I have read a lot of agonizing over the years about our nation’s retirement crisis.  Much of the blame is attributed to our move from mostly employer-funded defined benefit plans (pensions) to our newer, mostly self-funded 401(k) retirement system.  The burden for saving for retirement has definitely shifted to the employee since the 401(k) provisions were introduced in the late 70’s.

According to this article, back in 1979, 62% of private sector employees with a retirement plan were only covered by a defined benefit plan—a steady income they could count on when they retired.  By 2011 that number was down to 7%.  Over that same period, the trajectory for 401(k) plans went from 16% to 69%.

I have a few friends that are in that minority, still covered by pension plans in their jobs.  They may have accepted a smaller base salary than their private-sector peers, but they mostly feel like it is worth it because they will make up for it when they retire.

My sister-in-law is an administrator for a California school district.  One of my friends is a public school teacher, another is an attorney for the State of California--and her husband works for the Environmental Protection Agency.  All of them have plans to work until at least a specific age.  They can each recite to me, “If I retire at 60, I’ll get X% of my salary as a pension; if I wait until 65, it will be Y%.  And I get full medical benefits if I wait until at least age Z."

Ok, so back to all the hand wringing.  By most accounts, people haven’t saved enough in their 401(k) plans, most folks don’t have pensions anymore, and a lot of people are also worried about Social Security’s solvency.

So of course people look back longingly to a time when pensions were the norm.  If only we had the old pension system, we wouldn’t have this new retirement crisis.

I’m not sure the whole pension thing is really all it’s cracked up to be anymore.

Public-sector workers in Wisconsin, Detroit, and San Jose, California, to name a few, have all seen what they thought were guaranteed retirement benefits slashed.  Would they have taken those jobs all those years ago if they had known how the real equation of salary plus benefits plus pension was going to work out?  I’m not so sure.

But it’s not just public-sector workers who are at risk.  It’s airlines, automakers, and now more than a million truck drivers, construction workers, and other union members.  Congress just included a provision in the latest budget deal that changed the rules for certain multi-employer pension plans.  Many of those plan paticipants will likely see those “guaranteed” pensions cut as well.

Earlier this year I talked to our flight attendant for a while on our way to Bangkok.  She looked to be in her mid-60’s.  She said she had planned on being retired by now but her retirement benefits were slashed when United Airlines’ bankruptcy crashed her pension.  The Pension Benefit Guarantee Corporation (PBGC) stepped in, but they just insure that there will still be a pension payout, not that it will be as much as you thought.

Same situation with the innkeeper I met last month at a B&B in Santa Barbara.  Perhaps she would still have taken the inkeeper job later in life, she was fabulous at it.  But her airline pension, from a different airline, was similarly slashed.

Does this system still look so good, so safe, so dependable?  At least with the 401(k) system, the nest egg you create is actually yours to keep.  Sure, the market can slash that balance for you when we have a bear market like we experienced in 2008.  But it should be clear to everyone by now, that that bear market also affected those “guaranteed” pensions.

Social Security payments can be changed by congress.  The PBGC guarantee is only as good the insurance company’s ability to provide the backstop.  And public-sector pension promises are only as good as politicians’ and taxpayers’ appetite for supporting that promise.

My 401(k) balance (which is now my IRA) is impacted by my own ability to save and invest—and of course market gyrations--that’s true.  But I’ll take that risk any day over the additional risk of my retirement income being cut by a politician or corporate bankruptcy.

How to Lose Money in the Stock Market:  Don’t Invest in it

How to Juice up Your Retirement Returns

Posted at 11:28 AM in Money Mondays, Retirement | Permalink

I think it's largely a matter of personality: some people like to be taken care of; some people like to take control and be responsible for their own future. I'm more like you, in the second camp; but whether it's public pensions, private pensions, or govt. programs such as Medicare and SS, I just think people ought to live up to their obligations. If a company or a govt., or anyone else, promises you something, they ought to live up to the promise.

It's a trade off certainly. I live on Social Security and a Federal pension and I'm comfortable with that. While it's party a take control issue, for me it's frankly an I don't want to be bothered issue. I dont want to have to look at stocks and funds and decide what to do (and even if I paid someone to do that, I would still have to be on top of it. I am not a numbers girl). I think people who enjoy managing money, and those who are comfortable leaving it to someone else will be more comfortable. I am more comfortable knowing that exactly monthly amount, and not having to retool or review those investments on a regular basis

Barb & Tom: I think the vast majority of people would prefer the certainty and ease of a pension. My guess is only a minority of people actually want to manage their own retirement assets. I get that. The problem is what Tom points out, that set payout is looking less and less certain these days. The promise isn't always a real promise. It's only a sure thing if your employer doesn't wind up in trouble or your legislators don't try and shore up a budget deficit at your expense. That's the part I think is so scary, that you can plan your whole career for a retirement that is promised to you on paper to only find out that it wasn't really a promise at all. Then what do you do?

You roll with the punches,Syd and you remain creative. I never dreamed or planned part of my retirement portfolio would be a rental property BUT it has made my retirement all the more palpable. My retirement strategy has been racked with creativity and good luck.
I made a plan. God laughed and then I made another plan.

Syd, remember that many pensions, especially in the private sector, have no COLAs, so their value will decline over time. And others, such as mine, became "frozen" at some point, meaning that whatever pension benefits one had built up would not increase no matter how much longer one worked at that company.

As for me, an early retiree like you (I am 51 and have been retired for 6 years), my financial stool has many legs. For now and for another 8 years, I will be living solely off my non-retirement investments. Then, my "reinforcements" will begin kicking in. Those include unfettered access to my Rollover IRA (from my old 401k), that frozen company pension, and Social Security. So, if one of those legs should happen to weaken or disappear, the other legs will be strong enough to keep the financial stool strong.

Cindi & deegee: I guess that's the lesson, to be creative and have lots of legs on that stool no matter which kind of retirement plan you have.

Syd, The problem with the 401(k) model of retirement savings is that it requires too much knowledge and effort on the part of the employee. Badly invested 401(k)s and IRAs are rife. Others can't be bothered to save for retirement at all — the rent and cable bills need to be paid now, after all. Some recent improvements have been made, such as automatic enrollment and automatic use of target date funds by some employers, but they are hardly universal, nor sufficient.

One advantage of the old pension system is that it is managed by professionals without active participation of the future beneficiary. You can look at examples of pensions that got adjusted, while I can mention pensions that friends have that haven't had any such problems (and I presume that they are the large majority of such plans).

The do-it-yourself 401(k)/IRA system of saving for retirement is great for those who are highly motivated and financially savvy, such as you and me. But what about the vast majority of people who are neither?

I am glad that the Social Security system does serve as a safety net for those who aren't well served by the new 401(k) model of retirement savings. The claim by some that the SS system is about to collapse is hogwash, although it could be made more robust with a few relatively minor tweaks. (Medicare, on the other hand, needs to be better funded by the payroll tax system and adjusted to be on a more sound financial footing.)

dpg: You're probably right, the majority of pensions are probably still in tact--often press coverage exaggerates the failures. And you bring up a great point, if we are to continue in this self-directed method of retirement saving, seems we should have required financial education in our school systems. There are plenty of subjects I learned in high school I never used again. Nearly 100% of students will need to learn about retirement security. This is a big hole.

Great post! My husband's defined benefit plan was changed to a defined contribution plan a few years before he retired. Unfortunately he was a little too young to get grandfathered into the old plan. He, and the people around his age got royally screwed. Fortunately, he had many legs on his retirement stool and was able to retire. Others weren't so lucky. The book Retirement Heist by Wall Street Journal reporter Ellen Schultz is a real eye-opener.

Planning for your retirement is really something that you have to put much thought into. But then again, even if you do so, there are many loopholes and broken promises. Guess this just serves as a message for those still far from retiring or gearing up for it to simply be ready for what's to come.

Neither of us were able to have 401K option. We were "fortunate" to be allowed to do a HuGe IRA contribution. :::smirk:::Now we are dependent on public pensions.My kids are in the same spot- public sector. We are praying the system stands for ten more years.
Ten years of saving now will solidly put us into the area of having enough to self fund our old age at the rate that we live now. We have been living on one pension and saving the second. It isn't as "fun" as we thought it would be, but it is realistic. Unfortunately, the money we save now is not protected from bankruptcy like our other pittance of retirement money.
Everyone should be able to save money at their own rate in a protected way. I am glad you had that option.