« How Not to Be a Burden on Your Kids | Main | Does Retirement Secretly Suck? » 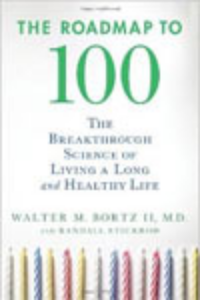 I promised I would share some of what I’m learning in my class about living to 100.

The class isn’t really about living to a specific age as much as it is about being as healthy and vibrant as you possibly can at any age.  But if you do what is necessary to achieve that goal, you’ll likely find yourself living longer than if you didn’t take steps to remain healthy and vibrant.

The class is taught by William Bortz, a professor of Medicine at Stanford University.  The first night of class Dr. Bortz told us a little about himself.  He is 84 years old, takes no medications, and runs one marathon each year.  As part of his fitness regime, he runs three times a week—three miles two days a week and 10 miles one day each week.  Although, last weekend, he admits he lost steam at nine and one half miles.

He was also quick to address his hand tremor at the first class.  I noticed it when he was passing out the latest paper he had published.  He explained that he did not, as one former young medical student wrote on his class evaluation, have Parkinson’s disease.   He has what is known as benign bla bla bla tremor.  He actually named the type of tremor, but of course I can’t remember the medical name for it.  So the benign bla bla bla tremor is hereditary, his son has it, his father had it and I think maybe an uncle or someone had it too.

He told us there is a very good drug treatment--Benzo-bla bla  bla-something-or-another--one of those names that a young medical student would have written down, but that went right over my head along with the name of his benign tremor.   Anyway the drug is extremely effective at treating this type of tremor.

“But,” he told us, “the drug has one big side effect--it wrecks your sex life.”  He held out his shaking hand and paused for effect.  “So I have a tremor.”

So like I said, the class isn’t just about living a long life, but living a life that’s worth living for as long as you possibly can.

The biology of aging

Dr. Bortz has us approaching the subject of longevity from the standpoint of our biological potential as humans.  Thousands of years ago, we had no idea how long this human organism could go since our demise was usually attributed to starvation, predators, accidents, viruses and infections.

Now we don’t have to hunt for our food while simultaneously worrying about being hunted.  We have treatments for viruses, infections, and many age-related diseases that we are lucky enough to live long enough to get.  So the question of human biological potential is closer to being answered.  How long could we live if we were able to keep the human organism in tip-top working shape for as long as possible?

We don’t know exactly but we have one clue from a French woman named Jeanne Calment.  Madame Calment lived 164 days past her 122nd birthday.  And she was relatively healthy for most of those years, living on her own almost until her 110th birthday.  She rode her bicycle until she was 100.  She did not suffer from Alzheimer’s.  Interestingly, she smoked.

Anyway, this hints that biologically speaking, the human species has longevity potential to somewhere around 122.

My retirement spreadsheet only goes until 100, so I'll have to make some adjustments to my budget if I last that long.  But whether you want to try for 122 or just try to live the years you have without debilitating conditions, the prescription is the same.  I’ll get to that in my next few posts.  (Oh, and if you don’t want to wait that long, you can go get a copy of Dr. Bortz’s book, The Roadmap to 100:  The Breakthrough Science of Living a Long and Healthy Life.)

How Long Will You Live?

Sounds like a great class. I'm guessing that Dr.Bortz has essential tremor. I have it also as did my mother and so does my daughter. It does affect my small motor skills such as writing, holding a coffee cup, spoon, etc. No other problems for me at least. I always enjoy your informative blogs.
Dee

Jeanne Calment was the exception that proofed the rule. Which is to say your not going to last that long and she was French so attitude may have played a role. Everyone wants to go to Heaven but no one wants to die. Research her? she was a person who lived by moderation. Even in her smoking. Which is something I won't discuss here for a lot of reasons:)

Dee: Yes, another reader emailed me with the same diagnosis. Although I still don't really remember what he said, a Google search seems to show that's the only tremor with benign in the title, so you are probably right. I have benign forgetting disease, clearly.

fred: Our guest speaker last night, Leonard Hayflick was quick to point out that there is basically nothing you can learn about longevity from a sample size of exactly one person who reached 122 except that 122 was the age that was reached. Any attempt to extrapolate the "why" of how she lived that long would be scientifically misguided.

By the way, I don't want to go to Heaven, it sounds boring and the decor is not my really style (pearly gates and streets of gold sound too gaudy to me. I'm a less-is-more kinda gal).

My Dad is 95 going on a super-alert 40. (!!) The secret to his mental youth is his curiosity and interest in learning.

He's very well off physically as well (for 95). Lives by himself. Takes care of himself. The secrets there, I think, have been his long-time attention to diet and his consistent exercising via walks, etc. (He still goes to the gym at his apartment building!) Plus his instant-action-response to anything that feels physiologically wrong. No living in denial for this guy!

If I take after him genetically, it's a good thing I've got a good long term personal finance plan. :O

Thanks for recommending this book. It inspired me to walk to the park on a cold snowy day in NYC. I don't think I will take up running-but I will continue my long walks to the park.