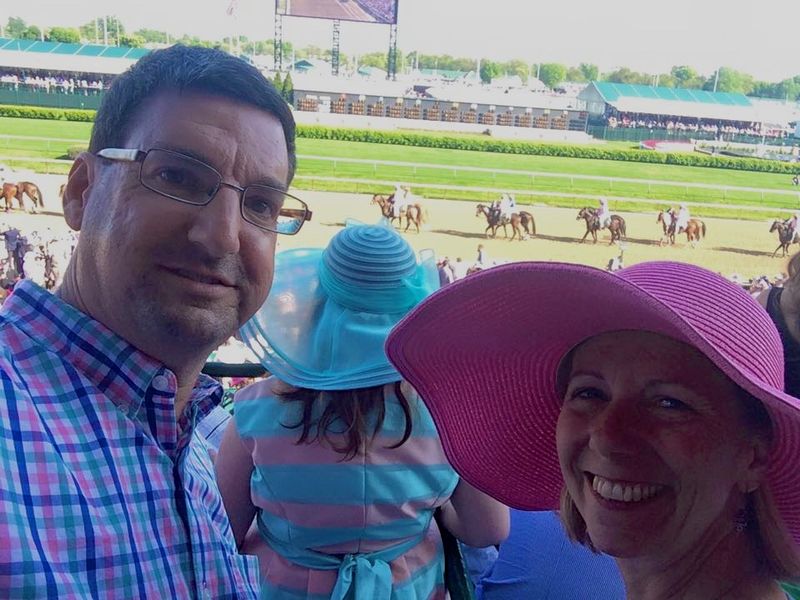 (Photo Details:  May 2015 at the Kentucky Derby.  Is retirement planning like betting on a horse race?)

The 4% “rule” is based on financial planner William Bengen’s analysis of 80 years of historical stock market, bond market, and inflation rate data.  By studying every 30-year slice of history within that 80-year period, Bengen showed that a retiree who is able to live off 4% of her beginning retirement nest egg (and that same dollar amount, adjusted for inflation each year), would never run out of money if she lived as long as 30 years.  In most cases, our retiree would wind up with money left over.   But even in the worst slices of that history, she would not run out of money before her 30 years were up.  (As long as she allocated at least 50% of her nest egg to stocks.)

This is the criticism I read the most.  Critics say the 4% rule works fine unless you retire smack dab into a stock market meltdown like we had in 2009.

I’ve never really understood that sequence of return fear.  First of all, Bengen’s data included plenty of recessions and stock market gyrations--even the Great Depression—the mother of all risky sequence of returns.  It’s hard for me to believe that retiring into one of our more recent recessions would have been worse than having retired right before the stock market crash of 1929!

I retired March 1, 2008, right on the way into a grizzly of a bear market, and guess what?   Now seven years later, the market is at an all time high.  And it didn’t take seven years to recover either.  From the market’s bottom in early 2009, the market marched steadily upward, recovering most of its losses by early 2013.

Yes, it seemed like a long time when I was in the middle of it, but here’s some math:  If you retire with 25 times your projected living expense needs that are not covered by other sources (the amount you need to have in order to follow the 4% rule), and allocate your portfolio conservatively 50% to fixed income assets and 50% to diversified stock funds, (the minimum stock allocation required to follow the 4% rule), you are actually holding 12 1/2 years of non-stock related assets when you retire.  Assuming even just one-third of those more liquid assets are in cash and shorter term CD’s and bond funds, you have about four years of living expenses available to you without touching your stock investments.  That would have been enough, even in this Great Recession to weather the sequence of return storm.

The other argument I read a lot is that the 4% rule doesn’t work anymore because of our low interest rate environment.  Well I have yet to understand that concern either.  Rates have been very low since I retired.   But why would you just look at interest rates?  With a proper allocation between stocks and bonds, it’s the total return on my nest egg that matters, not just how much I’ve earned in interest.  Since 2008, here’s the total return on the S&P 500 and 10-year Treasuries:

The only reason you would care only about interest rates is if you were holding all or nearly all of your assets in cash and short-term bonds.  In which case the 4% rule was never intended to work for you in the first place.  You have to hold at least 50% in stocks.  Of course the rule doesn’t work for a situation that it’s not intended to work for.  Ditto with keeping your nest egg in cash under your mattress.

You’re going to die with too much money left over

This one may be true.   If you don’t experience a 30-year stretch of time at least as bad as the worst 30 years of the historical data, you die with money left over.  Which means that during your life, you unnecessarily scrimped when you could have spent a little more.  But you’ll be dead, so I guess you won’t really regret it.

But it’s not really fair to kill the rule just because of this possibility.   After all, the rule is simply to give you peace of mind in the worst possible case.  Over the years, the guideline has been interpreted more like a commandment:  Thou shalt not spend more then 4% (in real terms) of your starting retirement nest egg.

Of course, deciding that you actually have enough money to go ahead and retire will always feel a bit like jumping off a cliff.  So my next post will give you some ideas to help you build a resilient retirement no matter what your retirement years hold in store.

So glad you got to go to the Derby. Hope you attended the Oaks day too - that's when the locals go. Really appreciate all your posts, Syd!

Thanks June. Actually we really attended Oaks day, not Derby day. But I didn't think most people would even know what that is. That's why the pink hat. You must be a local! (We were doing the Urban Bourbon trail on Derby day. . . .)

Thanks for making us all feel better, Sydney! So refreshing amongst all the doom and gloom! I'm looking forward to hearing your thoughts on what types of fixed income assets we should hold. Also, do you know how long it took for portfolios to recover after the Great Depression? That might give people an idea how much cash to keep on hand, for absolute worst case scenarios. I hear from fearful family and friends who are waiting for this current bubble to burst. Will definitely share your post with them to help them feel better. Thanks! Oh, and love your pink hat!

I have to admit to completely ignoring the 4% Rule. I base my available income calculations on the dividend and interest income that is generated by my investment portfolio. Luckily for me, I've driven my basic living expenses down (while still feeling I've sacrificed nothing I value) to the point that those expenses are more than well covered by my passive dividend-and-interest income stream. As to what I'll do with the investment principal if I don't ever draw it down, that's a question I intend to more seriously address when I get closer to 80. (Seriously.)

All that being said, your post is a smashing analysis. Well done.

I enjoyed this post Syd, thank for the information and highlighting the 4% guiding rule. In Australia the Superannuation rules include a sliding scale of minimum amount that can be withdrawn based on age e.g. once a person turns 65 years 5% must be taken from Super each year. I will read the related posts and also look forward to reading your next post with ideas to build a resilient retirement. I love your pink hat. It looks like you had a great day at the Kentucky Derby.

Another thing that doom-and-gloom retirement types don't consider, when wringing their hands over not having enough money for every possible contingency, is that one can adjust spending when times get tough. Most people have some discretionary items in their budgets that can be cut back for a year or two, if needed.

The main purpose of the 4% rule, in my judgment, was to give those still working a rough answer to the question "how much is enough?" 25X the budget expenses not covered by other sources of income, such as Social Security, is a good retirement savings goal. And that gives people something to shoot for. It also gives we early retirees some confidence that we can, indeed, leave the work-a-day world behind and still make ends meet over many years. So far, so good, in year seventeen for me!

I went to the derby a few years back and had a blast (even though it poured the whole time and was no more than 50 degrees). I don't think the 4% rule is dead (at least I hope not), but no one can predict the future. Will the S&P 500 return 10-12% annualized like it has been known to do for 30+ years? Maybe not... But that definitely doesn't mean the 4% rule is dead. I look forward to the next 10, 20, 30 years to see what comes, and am willing to be flexible if things don't go 100% according to plan.

dpg: Exactly! (More on that in my next post). Seventeen years--I think we can all take comfort in that!

Fervent: We got really lucky on the weather--72 degrees and sunny Fun, but six hours for six minutes of action--wouldn't be worth it without all the cool hats and outfits to watch go by between races. Oh yeah, ad the mint juleps.

On your 10-12% comment. Actually, that's a situation where the 4% rule would wind you up with a huge stash of cash when you died. In other words, that's the best case scenario, not the worst. The one in which you COULD have spent more during your lifetime than the 4% ruled allowed for. Not a bad adjustment to make if it worked that way. . .

Here is a rebuttal to the 4% naysayers: