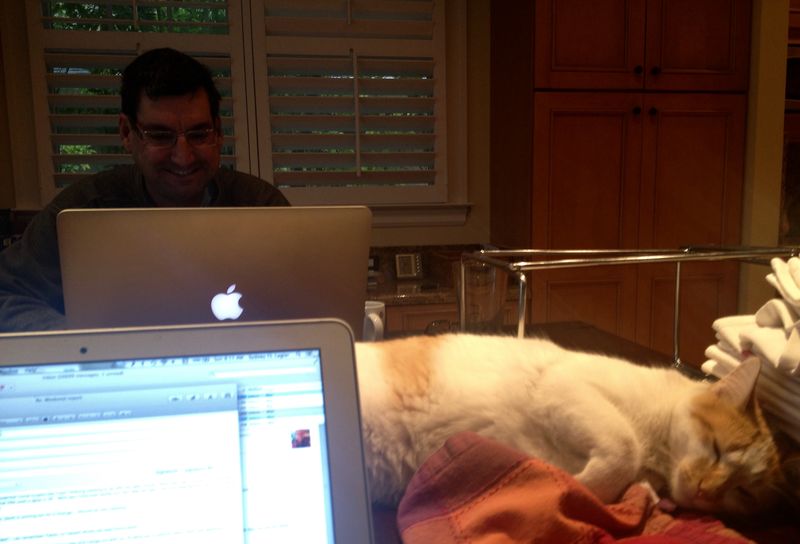 Our back yard seems to attract a lot of cats.  They lounge around in the sun mostly, but we had seen many of the kitties drinking the sprinkler water that pools along the bottom edge of our barbeque cover.  So I started leaving a bowl of water out for our feline visitors.

Always, the cats ran if I went out to try and pet them.  Not Fia.  She came right up to our sliding glass door to introduce herself.  And when I opened the door, she didn’t flee—she came right in and made herself comfortable on our breakfast table next to our computers.

We became accustomed to her visits, she spent most of her day here with us when we were home.  After a week or two of visits, I started to worry that she might be a stray, so I got a little bag of kitty kibble to see if she might be hungry.  She gobbled up my offering.

When she came over after that, she would walk right over to the cabinet where we kept the cat food, and stare at it until I got the hint.

It was at that point that I decided I had better see if any of my neighbors were missing a cat.  I sent an email out to all my neighbors with a photo and asked if anyone knew who this cat belonged to.  I guess I should have completed this step before I started feeding her.

Right away, the neighbors who live behind us sent an email.  “Oh that’s our Fia!  I guess she’s cheating on us!”  She wasn’t technically missing because she would go home every evening when they got home from work and eat again--breakfast and dinner at their house, and then a little snack during the day at ours.   At 9:00 or so each night they would bring all three of their cats inside to sleep.

So I stopped feeding Fia but she still came to visit most days while her family was at work and school.  We had a good thing going, all the benefits of kitty companionship and none of the responsibility!

Then about a year later, we arrived home near midnight after a delayed flight home from our month-long trip to New York City.  And there was Miss Fia at our back door.

I knew she was out way past her curfew, so I let her sleep over to stay safe that night.  After that, she came for a sleepover every few weeks.  I guess she figured if she was out too late to get in at her house, she had a back-up plan.

Then came Rainmageddon.   While we haven’t had nearly enough rain here in California, we did have a couple of big storms with rain that didn’t stop for two or three days.  A sopping wet Fia showed up on one of these mornings and stayed for 48 hours straight.  I tried many times to get her to go outside to go to the bathroom, but that girl can sure hold it!  Each time I put her down outside, she’d beeline back to the house faster than I could get there myself.  I even tried to escort her out under an umbrella.  But she wouldn't chance it.  She really did not want to be stuck outside!

I let her parents know she was waiting out the storm here with us so they wouldn’t worry about her.  When the sun came back out, she left, and we went to Las Vegas for a few days.

The next part of the story makes me kind of sad, so I think I will tell you that tomorrow.

Oh, the suspense! Poor Fia. At least we know that she is going to land on her feet...