The Three Phases of Aging 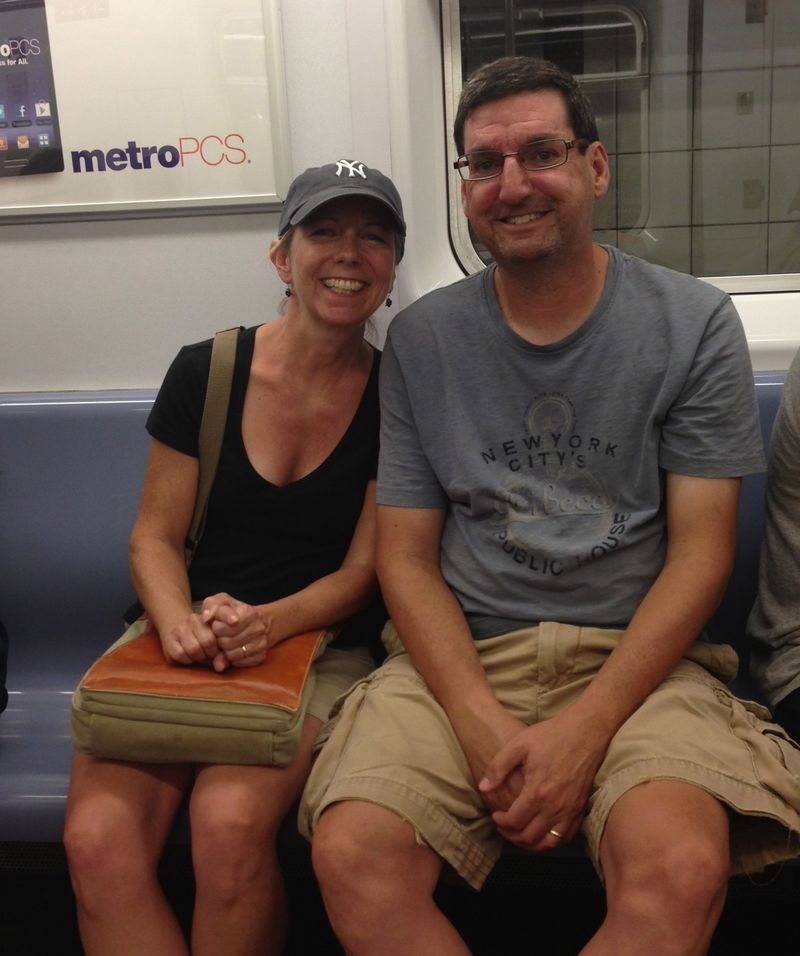 (Photo Details:  Subway home from the Yankee's game two years ago, back when I was actually young.)

Only seven years ago, people used to say, upon hearing that I was retired, “Wow, you are so young to be retired.”

At some point over the last seven years, that stopped happening.  Maybe a couple of years ago, I’m not sure.  But no one really says that anymore when I mention that I am retired.

Last year, when I was here in New York with my friend Kendra and her daughter Taylor, there was an incident on the subway.  An incident.  I thought it was a fluke.  We were riding the Lexington Avenue Express down to The Stand comedy club--forgive me if I’ve already told you this story, that sometimes happens with us old people.  As the subway pulled out of the 86th Street station, a woman--who had to be in her mid-to late-60’s--leaned past Taylor, past Kendra and said, directly to me, “Would you like to sit down?”

I looked around.  She was definitely talking to me.  She was offering her seat to me.  She wasn’t just offering it to me, she was leaning all the way across the subway car to get my attention--around Taylor, and around Kendra--who by the way is only one year younger than I am.  Did I mention, I was only 50 at the time?  I was at least a decade younger than this woman.

She had some nerve.

New Yorkers are very polite in this respect.  I often see someone giving their seat to a pregnant woman, a disabled person, and yes, the elderly.  I’ve done it myself.  But when did I become that elderly person?  (Trust me, she didn’t think I was pregnant.)

I kind of forgot about this incident, even wrote it off as just a whacky New York experience, of which I’ve had many.  But then two nights ago, Doug and I went down to dinner at Bond Street, a hip sushi restaurant we both love.  The 6 train was under some construction this weekend, so it was not making stops between 14th Street and Brooklyn Bridge.  Although we had already walked seven miles of Manhattan streets that day, we decided to walk from 14th street.  That’s how young and vibrant we are.

At the restaurant, the hostess asked us to wait in the bar—our table would be ready in about 10 minutes.  So we squeezed around some people and found a place out of the way of the front door and—here it comes—a young woman offered me her seat in the bar!  At least this woman was actually younger than I am--by several decades.  But still . . .

Last night we went to the Comedy Cellar.  And after the show, we walked over to another cool Chinese restaurant that we love in the West Village.

When we used to come to New York, before we started using home exchange, we always stayed downtown.  We hardly ever ventured above 14th Street.  Maybe to go to a Broadway show, or to go to our favorite jazz venue in Columbus Circle.  But that was it, all the action is below 14th  Street:  the late-night dining scene, the jazz clubs, the comedy clubs, the vibe, the buzz.

We only started staying in the Upper East Side (a neighborhood I had previously written off as too old for us) because that’s where we found home exchange partners that wanted to exchange with us for a month every year in August.

But last night, while sipping my shiso cucumber martini and enjoying the Katz’s pastrami eggroll at RedFarm, I looked around.  Doug and I were the oldest people in the restaurant.  By a lot.  Given the chance, these people would likely offer their seat to me in the subway.

I realized that sometime over the last five years of our home exchanges to New York, it happened.  We actually belong in the Upper East Side now.  How did this happen?   I still feel young.  I still feel healthy.  In fact I am healthy--my cholesterol is low, my blood pressure is low, and no, I don’t need your seat on the subway!

But there it is.  I’m a person that defines healthy with words like cholesterol and blood pressure.  These are terms that wouldn’t even occur to an actual young person.

Am I Really Getting Older Like Everyone Else Is?

Why I Love New Yorkers

Good to see you here again, Syd. Although I haven't had anything like what you described, I do feel like I've aged a lot this year because of some health issues. Don't worry, I am okay now.

Oh, I'm jonesing for a Syd fix today...
And while I'm at it, Tamara, I miss your blog too. Hope you and Mike are well. I know without doubt that you are keeping busy.

Diane: Thanks! As it happens I do have an idea that I want to write about. Hopefully this weekend!

This was a great article. I experienced the same thing at a McDonalds one day. The first time someone asked me if I qualified for the discount coffee. I almost felt like I had to take my ID out to prove I was 55 and over. It was the first time I had "reverse" ID. Not being proud I was carded for looking too young, but having to be carded because I now look old enough. LOL. Also, I now call the clerk at the clothes stores and grocery stores "sweetie". I call everyone "sweetie" now. When did I decide I could do that? You know you're getting old when: Young people call you "Ms". so and so automatically, instead of just using your first name. I am glad you have a blog like this, we need somewhere to share the humor of the unexpected days that come up indicating that we probably are as old as we are. Thanks.

Tess: Well thank you sweetie. (Actually, I kind of like when people call me sweetie or hon, so this is where I say embrace your inner old person since it's nice.) Actually, it used to bug the crap out of me when I got carded when I was young. I hated looking young. But I suppose if I qualified for the senior discount and they made me prove it with ID, I might actually like it. Like they can't possibly believe I'm that old. I guess we'll see when the time arrives--I turn 52 this year, just a few years to go now.

Syd, leave it to you to shed the veils and provide true candor about life experiences.

Your post, and your experiences, reminded me of something Ricki Lee Jones said in her recent interview with Shad on Q TV (Canadian TV, a great youtube channel). Check out what she says in this video about middle-aged women at 14:35 minutes
https://www.youtube.com/watch?v=fNIZvrV0q7I

Very profound. I'm a 51 year old man and I feel it, too, what Ricki and you describe. And it's macro, too, not just micro. Societal. What do I mean? Is the 50+ year old chosen for the job promotion, the softball team, the hiking group, the Meetup "fun" social gathering, like the 40 or less person? No. They are often "invisible" in these circumstances.

Oh, how I can relate to being the oldest person in the room. Yes. Happens all the time if I look for it. And, despite my retirement at 48, just as you, I no longer am looked at as an early retiree by others. I can stay fit, and strong, and hike in the Sonoran mountains for thirty miles in three consecutive days (as I did last week)--I'm fitter than I have ever been in my adult life--and yet to others, I'm the older guy. (God, if they only knew my youthful thoughts: tawdry, uncensored, often sophomoric!)

I suppose you could look at your experience as feeling affirmed that you were even offered a seat; we fifty-somethings are only a stone's throw from becoming enshrouded in a cloak of invisibility. A cloak of nothingness.

Recently I had a birthday, but this post isn't really about that. I'm ok with getting older. I appreciate your effort posting about this article Syd! I wish for all of us getting older for good health and let us don't forget to enjoy life and carry all our back-aches with great strength and thanksgiving from above.

You nailed it! I remember being in total shock when someone offered to give up a seat for me on the subway! I was only 48 at the time. Wonderful post.

i think i have been semi retired since age 25. i am 28 now, and i may sell my business soon. they are very interested so, i am guessing i would be semi retired for sure, but never fully retired by choice.
i mean at the end of the day I want more money streams. This past week i worked probably less than10 hrs and thats just going around picking up money and doing deposits. my wife and I own 7 wireless stores at the moment.
If we do sale we will start flipping houses and making money from rentals.

whatever reflections reflected above are to be appreciated. you will find funny when i say recounting my experience. after my first child birth i had a slight bump in the abdomen so as to make everybody think i am pregnant.. when i was traveling in the public transport everybody used to offer me seat. chuckling underneath i used to accept. In public how can i tell every body i was not pregnant. the aging factor gradually has started gracing me too. good to age gracefully.